Stanley Milgram was a Yale psychologist who was interested in trying to understand how ordinary people could be influenced into committing atrocities, for example, the German people in WWII. His experiments begin in July of 1961. His conclusions are now more relevant than ever...

The premise of Milgram's research was;

The third point is the most important. The long held understanding of the Milgram experiment is that people follow orders through blind obedience only i.e. 'the Nuremberg Defence'. However, there is a deeper, darker explanation for the participants' actions that was drawn from these experiments. This relates to a concept called 'Engaged Followship'. This understanding came from debriefs of the participants after the experiment.

These participants had been willing to place another human being in harm's way, right to the point of ending their life, with the flick of a switch.

Were they traumatised and horrified?

No. The complete opposite.

In an ugly twist, the true nature of humanity was exposed. The participants were enthused and elated. They felt that they had been able to contribute to the advancement of science. Further, the participants expressed that the experiments should continue, 'for the greater good'. However, the participants completely overlooked what they were willing to do in the process.

The Explanation - It is not about Following Orders.

The true results of this experiment are far more terrifying to contemplate. People were not blindly following orders. They were actually willing participants in an experiment 'for the greater good'. Not 'Befehl ist Befehl' (orders is orders) but rather 'Engaged Followship'.

This is the act of willingly participating in something 'for the greater good' because you believe in the purpose, no matter the perceived harm in doing so. Think about the aggressive mask push we are currently experiencing worldwide, not just from Governments, but from our family, friends, neighbours, co-workers and society as a whole.

Milgram's participants were informed that the science on the perceived negative reinforcement experiment was not settled. Just as we are told the science on masking the general population is evolving. Milgram's participants felt they were contributing to an important experiment. They knew this experiment was harmful, 'but the end justifies the means'! Better 'SAFE' than sorry, even if the actions are actually unsafe. Even if there has been no demonstrated benefit in many published studies or current experience. Everywhere masks have been made mandatory, cases increase.

The proponents of masks, lockdowns, social distancing and more have been labelled 'sheep'. However, they could be more appropriately identified as willing mice in the greatest and most tragic social experiment the world has ever seen.

My first article was entitled The Best Laid Plans for a reason. It was a reference to John Steinbeck's novel, 'Of MICE and MEN'. In this, we see the tragic and unintended consequences of being 'kind' and 'keeping people safe'.

What would be the implications if 2020 was just another Milgram Experiment on a worldwide scale? What would this show us about the human condition? Would it explain how the world has changed so rapidly and 'by consent'?

Experiment 1: the bottom of the Pyramid.

"So how will it be George? Tell me about the Rabbits again! It will be wonderful! Just wonderful!"
Your Government: It will all be OK, everything will go back to the new normal soon.
You: Tell me about the rabbits, George...
Your Government: Once you wear a mask, social distance, get tested, isolate, get vaccinated, it will get better. Life will return to the new normal, you can go back to work/school/travel, be there for your loved ones in care homes, live again. Everything will all be okay...

Experiment 2: the middle of the Pyramid.

"So how will it be George? Tell me about the Rabbits again! It will be wonderful! Just wonderful!"
Sustainable Development: It will all be OK, everything will go back to the new normal soon.
Your Government: Tell me about the rabbits, George...
Sustainable Development: Once you get rid of fossil fuels, reduce the population, get rid of illness through vaccination, remove the burden on health care by eradicating the elderly and infirm, switch to the green new deal, life will be better, more 'sustainable' and everyone will be happy.

At the top of the pyramid.

"So how will it be George? Tell me about the Rabbits again! It will be wonderful! Just wonderful!"

2030. A young healthy dependant population without need for health care and government bureaucracy.

"Welcome To 2030: I Own Nothing, Have No Privacy And Life Has Never Been Better" 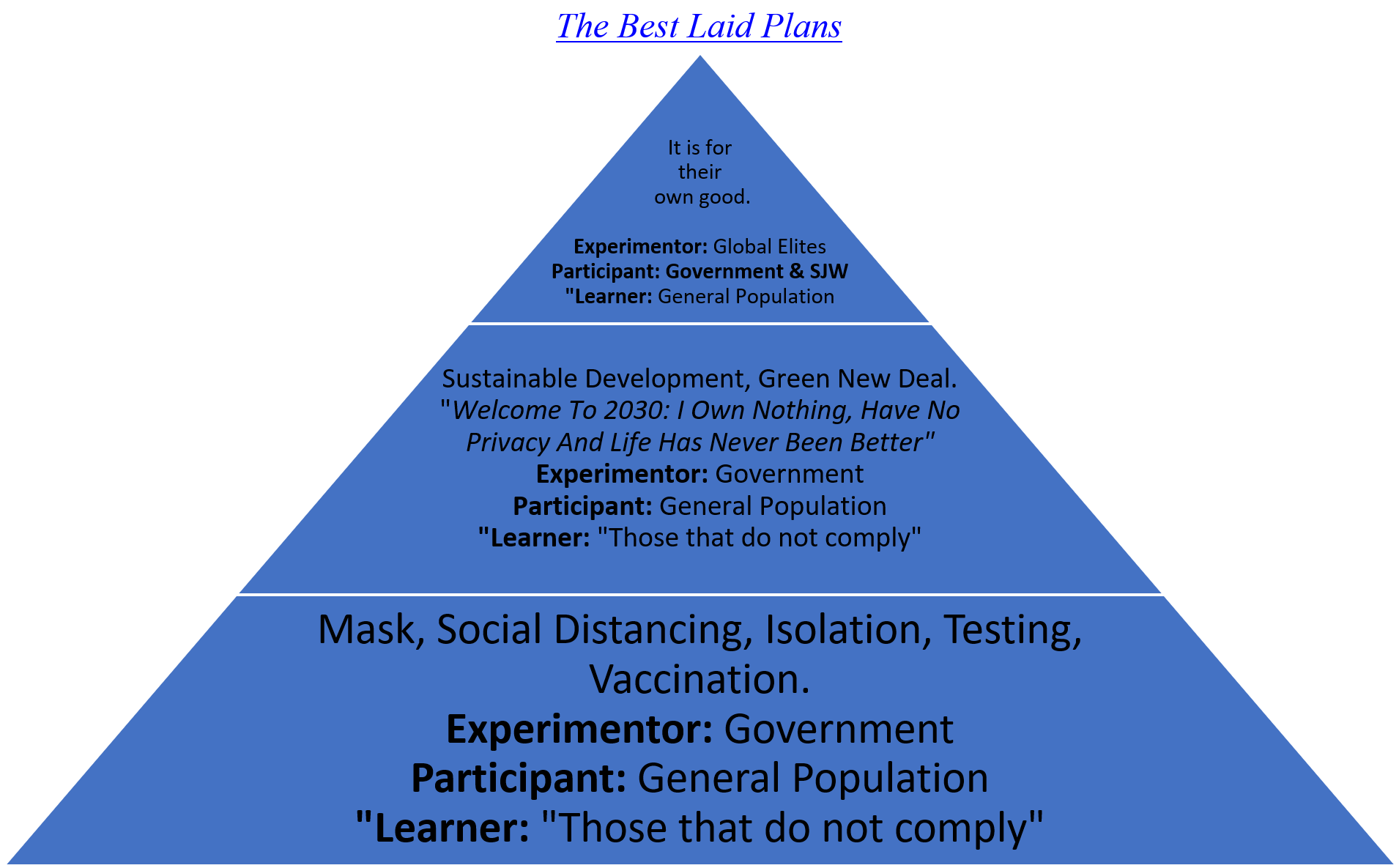 Remember 65% of people in the original Milgram experiment felt no danger to themselves. They had nothing to gain and yet they were willing to kill a stranger with the flick of a switch because someone in power told them "please continue".

What are you willing to do behind that Mask? Will you be the one to flick the switch on a stranger or someone closer to home?